Reestablishment of the church of Boulogne-sur-mer 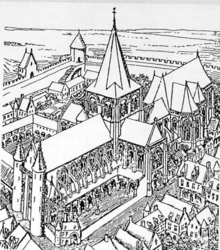 Re-establishment of the chapel of Our Lady, Boulogne-Sur-Mer, by Bishop Dormy

According to tradition, it was in the year 633 that an unmanned boat was seen carrying a luminous statue of the Blessed Virgin Mary into the estuary at Boulogne. Saint Omer, (also known as Audomare) was the bishop of Therouanne, and the statue was carried to the church where miracles soon began to occur. This statue, known as Notre-Dame de la Mer (Our Lady of the Sea) became a popular object of pilgrimage between the 13th and 16th centuries.

In about 1100 a new church was constructed at the site that underwent many changes over the centuries, including the addition of a choir. It was in this church that King Edward II was married to Isabella of France.

Reestablishment of the church of Boulogne-sur-mer

The church flourished until the advent of the French Revolution, with its liberal principles that overthrew the Catholic monarchy, catalyzed violence, turmoil, and anarchy, destroyed the men who set it in motion, and eventually culminated not in liberty, fraternity, and equality among Frenchmen, but in cruel dictatorship under Napoleon.

The church of Notre-Dame of Boulogne was seized, and worship was prohibited. The structure was used as a military warehouse until it was sold to traders from outside the city who began demolishing the church in stages. Finally, in 1793, the miraculous statue of Our Lady of the Sea was burned, leaving only a small portion of the hand. Only the crypt of the medieval structure survived.

A local priest, Benoit Haffreingue, vowed to rebuild the cathedral. He was a self-taught architect, with a strong desire to restore the honor of Our Lady of the Sea and return the bishop to their city. He led a campaign to get the support he would need for the work, and his enthusiasm gained him a great deal of public support.

Once work was begun, Haffreingue discovered a huge crypt about 128 meters long. It had been there unknown for centuries, perhaps having been filled in during the time of the siege of Boulogne in 1544 by King Henry VIII of England. The Romanesque style columns were crafted in the 11th century. There were also the foundations of a Roman temple dedicated to Mars, and cannonballs used during the 1544 siege.

The fact that Haffreingue was self-taught may be the reason the nave's slender arches collapsed in the year 1921. During the time the repairs were being made, the whole structure was reinforced with concrete, which many feel made it possible to survive the bombing the city received during World War II.