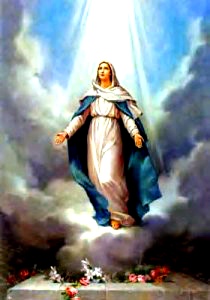 August 15: Assumption of the Blessed Virgin Mary into Heaven (Feast instituted by Pope Leo IV in 847)

“Open the portals! The Queen is approaching. Lift up, O eternal gates!”

The endless parade of the blessed crowded about the wide-open gates of heaven. There was tense expectancy, such as one finds along a line of march as a parade approaches. A roadway of clouds billowed the pathway from an uncorrupted grave to an incorruptible throne.

At last, borne by angels, the lovely Lady arrives. It is the first Assumpton Day, the Assumption of Mary. The heavenly throng gasps with admiration. The celestial singers burst into song. The angels hurry to and fro to catch a glimpse of her and to tell their companions of her beauty.

Jesus waits at the open entrance, throws His arms about His Mother, leads her triumphantly and happily to the very throne of the heavenly Father, who leans forward and places solemnly and smilingly upon her beauteous head the crown, as the Holy Spirit, heavenly Spouse of the Virgin Mother, casts warmth and light upon the welcome newcomer.

The Assumption of Mary! Sweet scene of Mary’s bliss! Who can measure her happiness? Who can count the throbs of joy in her heart: joy that now her lonesome life on earth without Jesus is over; joy that now she has Him, never again to lose Him; joy that now she can enjoy His company without the interruptions of earth or sense; joy that now she can help everyone on earth who is devoted to her Son; joy that all the honor and all the praise and all the glory is given to her because of her Son; joy that the very crown she is wearing as the Queen of heaven and earth, is given to her because she is the Mother of Jesus, the Son of God; joy that an eternity is just beginning during which she can wrap herself in her Child and her Redeemer, even more closely than their lives had been entwined upon earth.”

Our Lady assumed into Heaven! Entering body and soul into the presence of the Most Blessed and Eternal Trinity! The Assumption of Mary! Her sufferings, great beyond all measure, are nothing now as she finds her reward in the greatness of the Infinite God. What eternal joy in His possession; what peace in being eternally possessed by Him – surely the richest reward for the obedient Handmaid of the Lord.

Our reward is likewise the possession of the same Triune God – our way to Him is likewise along the same royal way as tread so humbly and submissively the feet of our obedient Queen. Her last recorded words in Sacred Scripture, her counsel to the servants at the wedding feast, applies to us with equal and unfailing force: “Do whatever He tells you!” Our obedience to Christ is our way to joy and peace.

Mary’s death was caused by love that consumed her heart; her death was not meant for punishment nor expiation, hence there was no violence nor was it painful, since she was preserved from the dominion given to death by sin. According to an opinion accepted since the Middle Ages, Mary’s death resembled Christ’s, because she accepted it voluntarily out of humble and loving obedience; so, she died of love in the strict sense of the word. Death came to her in the form of the weakening of the body caused by the supernatural might of Dying Love. Her natural vitality was exhausted by love-longing, by the strength of an ecstasy of love and her great love moved God to cease keeping her alive. Mary’s death was a holocaust of love where the sacrifice offered long before at the foot of the Cross in poignant and spiritual anguish was at last completed.

This feast, the Assumption of Mary, was instituted, according to Saint Bernard, in the very time of the apostles.

The Assumption of Mary

*from Feasts of Our Lady, by Msgr. Arthur Tonne, and The Woman in Orbit

Return to Marian Calendar August from The Assumption of Mary