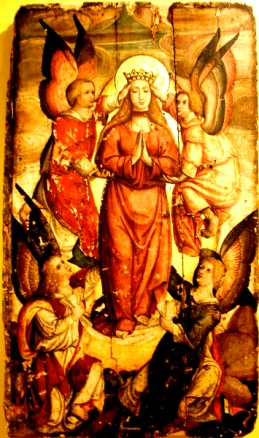 May 16: Apparition of Our Lady to Saint Catherine of Alexandria

The Abbot Orsini wrote: “Apparition of Our Lady to Saint Catherine of Alexandria, whose body was discovered on the 13th of this month, on Mount Sinai, in consequence of a revelation which the Queen of heaven gave of it.”

Saint Catherine of Alexandria, also known as Saint Catherine of the Wheel, is a Catholic saint, virgin, and martyr. She was the beautiful daughter of King Costus and Queen Sabinella of Alexandria, who at a young age decided to remain a virgin until and unless she should meet someone who exceeded her in status and political position, as well as beauty, intelligence, and wealth. She decided upon Christ, who reigns over us all, for “His beauty is more radiant than the shining of the sun, His wisdom governs all creation, and His riches are spread throughout all the world.”

While yet a teenager, Saint Catherine received a vision of the Blessed Virgin Mary and Her Divine Son Jesus Christ. In this vision, the Mother of God gave Catherine to her Son in a mystical marriage. Mystical marriage is in some senses very similar to a marriage ceremony, as Christ presents the chosen soul with a ring that is often visible to others, and often there are saints and angels present. There have been well over 70 documented mystical marriages with saints, and although the action is mysterious and not well understood, it appears that Christ gives special attention to these saints. Saint Teresa explained that it was the highest state a soul could achieve in this life, and represents a transforming and constant union with the Blessed Trinity.

Saint Catherine was martyred by the Roman Emperor Maxentius when she refused his proposal of marriage. Again, according to tradition, her body was taken by angels to Mount Sinai where a church and monastery were built in her honor. Saint Catherine’s relics were rediscovered about the year 800. Her hair was still growing and there was a continuous stream of oil coming from her body that was found to have miraculous healing properties. King Saint Edward was said to have collected some of that oil and taken it back to his kingdom with him.

Saint Catherine, along with Saint Margaret, were the two saints who spoke to encourage Saint Joan of Arc in her mission.